A Simple Business Model: Give The People What They Want -Tuesday, April 24, 2012

REPOSTED FROM A BLOG ENTRY FROM 2011

So a customer called us a week or so ago about a motorcycle lift. He had purchased a lift for just under $1,100.00 from another source, got it home to RI, and set it up. To his surprise the lift collapsed the first time he used it. The customer asked if we had anything “that isn’t a piece of junk.” First, I can’t help thinking what a sad situation it is for both the business and the customer. No business wants a dissatisfied customer, and no customer wants to be dissatisfied–right? Not to mention the “danger” factor. Certainly things can malfunction, but when you’re dealing with a lift? Need I say any more?

I told him we carry Titan lifts, Handy lifts, and Quality lifts, and I made a few recommendations based on what he was looking for. I’m a firm believer of following the customer’s lead. I have extensive product knowledge and offer as much information as I can when solicited, but I will never push a product they just don’t want or can’t afford. He said he’d stop by the shop, on his way to return the failed lift. They weren’t accepting of the explanation initially, but he was able to prove that it collapsed, and managed to get his money back. He was concerned and wanted to see bike lifts from each company we represent. I understood his concern (naturally) and reassured him that our offering of lifts wouldn’t fail on him. There’s a method to my madness. I’ve been doing this for 37 years, and the choices I’ve made in what lifts I carry are well thought out.

All are solid, well-made lifts, but I try to represent different price tiers, depending on the buyer’s needs and finances.

After recommending a Titan lift because of his price point with the failed lift, I told him it doesn’t have all finished polish he is looking for, but it is well-made, and I stand behind it. In fact, I never have had a return and never a dissatisfied customer. At this point, he told me he was serious about quality (preferring the best of the best), so then I got more of a sense of what he wanted.

Top of the line. I presented a Handy lift to him. After commenting on the fine details, he seemed to really gravitate to this lift, and he said he willing to put a little more money into it to know he had quality. He paid $2,050, nearly double what he paid for the failed lift, but that’s what he wanted. I didn’t have to “sell” him anything; he just wanted a premium quality lift. The experience actually made me realize why I started selling Handy lifts. I like the best of the best, too, and these are QUALITY lifts. Interestingly, even though Titan is in a different price tier, I chose them for their quality as well.

They may differ from Handy, but a good, solid lift with many extras as standard equipment, nonetheless. (Quite frankly, I wouldn’t be selling it if it wasn’t.) Titan motorcycle lifts fit people’s needs and the price is right. Here’s an analogy: Driving a BMW as opposed to a Ford Focus. BMW’s are engineered right, and they have all the polish to go with it! Costs a lot to fix, but it’s a rugged, nice, long-lasting car. Will the Focus work well? Yes, the Focus is a well-made car, too, but maybe the bumps feel a little different, and it’s a little noisier when riding on the road. With either choice, you reach your destination, right? And that’s all that matters. 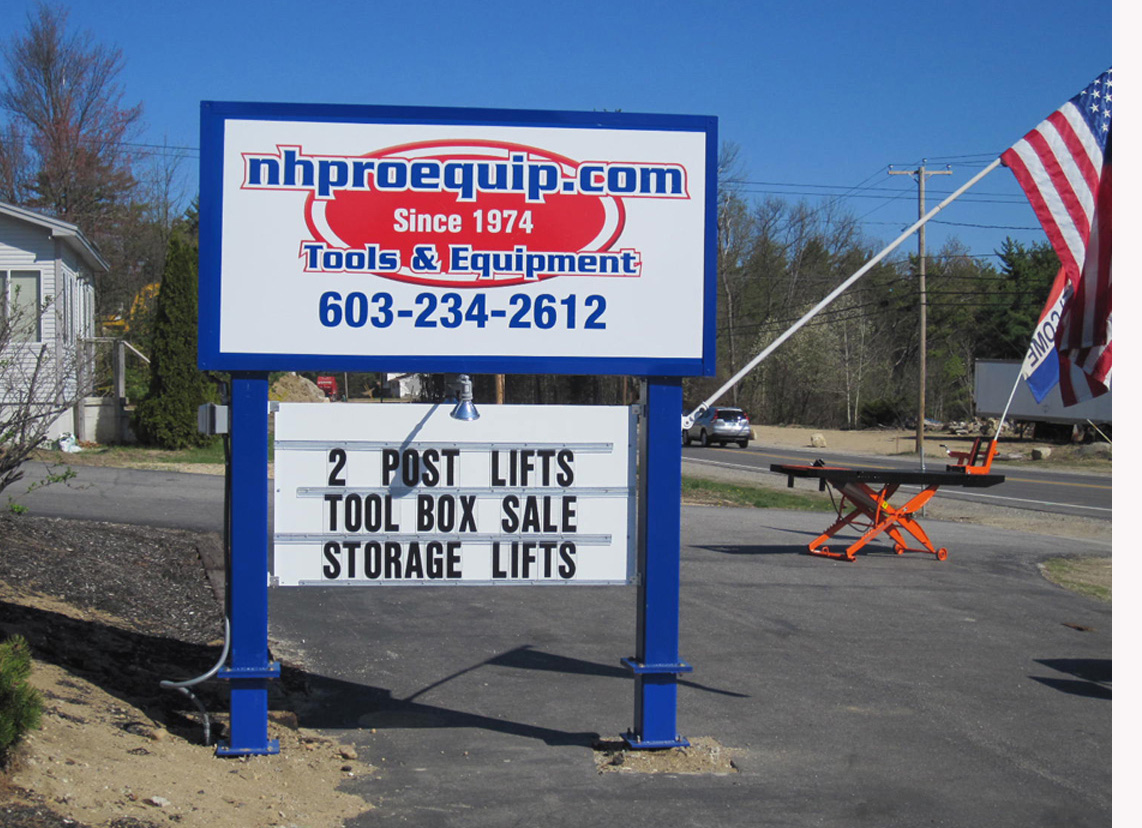 [/caption]
Comments (0) details
Introducing Wilton Vises... -Thursday, April 19, 2012
We are proud to announce our newest manufacturer, Wilton, a subsidiary of Walter Meier. We have just loaded Wilton vises to our website, which include Tradesman and Mechanics vises. I will post some photos of the vises we currently have in stock here at the shop. These are awesome products, solid and well made...and well-made in the U.S.A, I might add! Below is a little detail about our featured Wilton products. 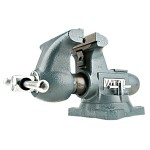 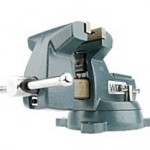 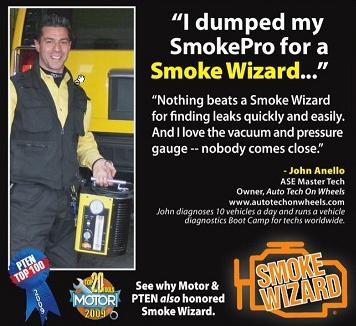 Nice Smoke Wizard ad...Visit the best leak detector on the market, the Smoke Wizard GLD-40 on our website for more information.
Comments (0) details
Truck Tire Mounting Procedures -Monday, April 9, 2012
This TIA training program contained herein reflects the consensus of the tire and rubber industry experts and the technical experts at the Tire Industry Association on those items and methods that have delivered the best performance record based on the experience of those experts. This TIA traning program is a voluntary recommendation that assists commercial tire service personnel with guidelines and procedures for safely operating road service vehicles. This TIA Training Program also includes test methodologies and information, equipment and supporting technologies. This Training Program contained herein is not exclusive. TIA cannot possibly know, evaluate or advise the transportation industry of all conceivable ways in which a practice may be undertaken or of the possible consequences of each such practice. Other practices or methods may be as good, or better, depending upon the particular circumstances involved. All who use this TIA Training Program contained herein must first satisfy themselves thoroughly that neither the safety of their employees or agents, nor the safety or usefulness of any products, will be jeopardized by any method selected. The above TIA Training Program is not intended nor should it be construed as an endorsement of any particular person, organization, or product. -Courtesy of Ken-Tool
Comments (0) details
Ken Tool Twist Socket: PTEN's Top 100 Most Requested Product -Thursday, April 5, 2012

The Twist Socket from Ken-Tool removes fasteners with damaged or rounded hex surfaces, or severely corroded and frozen threads. The Twist Socket grips positively into the surface of a damaged bolt head or nut with its fluted scallops which cradle the damaged hex head to allow it to be removed with a counterclockwise spiral grip surface integrated into the socket. The Twist Socket can be used with a ratchet wrench, a breaker bar or an air-impact wrench. The line includes 1/4"-, 3/8"- and 1/2"-drive applications; sockets are available individually or in sets. Sets are available with an organizer bar or in a blow-molded plastic case. 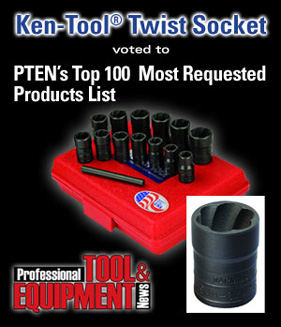 Comments (0) details
Titan Lifts Demos Bulldog Moto Cradle on Two Wheel Thunder TV -Tuesday, April 3, 2012
Quick transcription of video: This year we've brought some of our motorcycle lifts, but we've also brought our Titan Bulldog Moto Cradle. I'm going to show you a few features on our moto cradle that are a bit different from other wheel chocks on the market. The first thing you'll see about our wheel chock, that is different from any other wheel chock on the market is it's spring loaded. This fixes something that I like to call the "sloppy" or "floppy" cradle. The "sloppy" or "floppy" cradle just basically goes back and forth. Ours will always go back to the load position, no matter what you do with it. The second thing is that, wheel chocks on the market -with a lot of them, your tire is being held right up here at this front tire stop. The front tire stop is what is actually making your bike stand up straight. All the cradle does is guide you into it. So what we've done is, in the back we put 2 cam designs, so these two sides, as you come forward they're going to come together and they're going to squeeze together and that's actually going to grip your bike. Its going to make it so you're going to have a lot more lateral support than what you're going to get now, you're being supported from the front tire stop, all the way back to the back to the cradle. And the third thing you have is an A Frame design so it's a little bit more sturdy that way. [When you move your bike into the chock,] you're going to see it's completely self standing. In fact, it's not only going to hold the weight of the bike, it's actually going to hold the weight of the rider, as well, and it's not going anywhere. It's nice and sturdy. It can be freestanding, you can put it on your garage floor, you can mount it onto your truck, mount it on your trailer. And it is completely adjustable 13-22" diameter and a 70-140 mm width. Wheel chocks are meant to do one thing. They're meant to hold your bike up. This is just does it a little more securely. We all ride and we've all put our bikes into a chock and it just doesn't hold it as securely as we'd like. You know we've all had the situation where it's been in the chock and we bump into it and it starts to fall over and we grab it. Well, you bump into this thing..it's not going anywhere. Check out our Titan Bulldog Moto Cradle Wheel Chock, available in a variety of colors.
Comments (0) details
New Selections from Extreme Tools! -Monday, April 2, 2012

We've just added the latest and greatest offerings from Extreme Tools and wanted to share with you some of the newest additions to their line (and now ours!) that we are really excited about. The image above is of the 41" portable workstation (product # PWS4100TX). Visit the link and view an awesome financing option, too. The Extreme PWS4100TX 41" Portable Workstation measures 41"W x 17-3/8"D x 21-1/2"H. It is made of 16 gauge steel construction with welded seams, and comes with a power tool rack with built-in power strip. This versatile workstation holds and organizes your most needed tools: the wrench rack holds 17 SAE & 22 metric combination wrenches, screwdriver/nut driver holders, (64) 1/4" deep & standard socket pegs, (66) 3/8" deep socket pegs, (28) 3/8" shallow socket pegs, (64) 1/2" deep and shallow socket pegs, and (47) screwdriver/ ratchet drivers & extensions. The socket tray even lifts to access more tool storage underneath. This workstation also features a lockable lid which secures tools in place when it's closed, and it has a gas spring that raises the lid when unlatched for easy access. Heavy-duty side handles make moving this workstation an easy process around your shop or garage. It features weather stripping, which creates tight seal against dust and moisture, for long-lasting life. Textured finish is available in black or red (*shown above), and is weather-resistant. 30" workstations are also available, and both of these great products are currently in stock!
Comments (0) details