By KATHLEEN CALLAHAN New Hampshire Business Review Just how friendly is New Hampshire to small businesses? Pretty friendly, according to yet another report that ranks the state’s small-business climate. New Hampshire is the nation’s eighth-friendliest state for doing business and the fifth-friendliest state in which to start a business, according to the survey, which was done in partnership with Thumbtack.com and the Kauffman Foundation. It polled 6,000 of the small-business owners who use the website, which helps users to find local service providers such as wedding photographers, auto mechanics, and yoga instructors. “There are a lot of ‘business climate rankings,’ but there aren’t any that draw upon considerable data from small-business owners themselves,” said the website in a release. According to a Web designer in Lebanon polled for the survey, the state has “many networking sites and affiliate programs available for training,” which “makes it easy to network with new customers along with gained valuable knowledge and support.” The survey found there to be a gender gap among the small-business owners polled, with the male respondents 15 percent more likely than female respondents to rate their company’s current financial situation as “good” or “very good.” Political affiliation also played a role, with conservative small-business owners 27 percent more likely than their liberal counterparts to rate their business’s financial situation positively.

One general contractor in Seabrook said the state’s lack of sales tax was a major advantage of doing business, allowing “small New Hampshire business to buy and sell at a slightly more competitive rate than our Massachusetts neighbors.” The state scored an A grade for the ease of starting a business, its tax code and ease of licensing. But it got a ‘C’ for health and safety regulations and zoning laws and a ‘D’ for hiring costs. And even though the state ranked high nationally, business owners in the state are apparently a pessimistic bunch. The state ranked 45th nationally for its share of business owners who are optimistic about their company’s financial situation in the coming year. 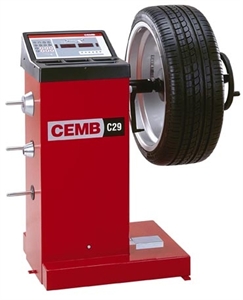 CEMB is a top manufacturer for many major wheel balancer labels. Their wheel equipment is perfect for gas stations, and small and medium size garages requiring basic computer wheel balancing for cars and light trucks. The C29 mobile wheel balancer balances steel and light alloy wheels of cars, light trucks, motorcycles, and scooters (with optional adapters) and it comes to you fully assembled. Here are a few of the features of this economical wheel balancer: It includes Microprocessor-based hand-spin balance (without motor), Quick Standard Nut Mounting, a foot brake for exact placement of wheel weights, Menus for quick selection of ounces to grams, inches to millimeters, and unbalanced thresholds .1 or .25 ozs. This balancer also features an optimization program for compensation of rim and tire unbalance. Along with self-diagnosis and self-calibration, it is built to offer mobile wheel balancing, with its unique size, weight and dual power supply. With Manual Data Entry options, it also has a Dual Operator Program. Another nice feature is its "Static" program plus 4 ALU programs for PAX, light alloy or different shaped rims. And the finishing touches - it has a one button split and hidden weight program, as well as a 4 compartment weight tray. This wheel balancer is chock full of all the features a garage would need.