Motorcycle Lifts - Based in NH, shipping to 48 States and Eastern Canada[/caption]We wanted to present a little bit about ourselves to those folks in NH looking for a motorcycle lift. We currently carry PRO 1200s and PRO 2500s, Elevator 1100s and Elevator 1800s, and Titan Lifts. The PRO lift has really taken off - for several reasons - and we'd like to talk about that a little bit for those of you in the market for a lift. We sell the PRO lifts direct, so the cost is a bit lower for the consumer ($699 for basic package which we outline below, and $868 for side rail package). This was our intention to both offer you a good quality lift at a low price, but also to stay competitive...without a "middle man" we can reduce costs all around. We are your 'go to' for anything you need with this lift! We have been in business for 40 years and have a widespread presence here in NH, as we are based in Bow, just south of Concord, so we are somewhat central to every location. There is a shipping charge with this lift, so those local to the area may choose to pick up their lift at our shop, located at 678 Rte 3A in Bow, NH and save on costs. There is no sales tax in NH, so the list price - if you choose to pick up - is your final cost! We do a full quality control check before this lift is shipped (or before you pick it up, as the case may be for you NH residents!). You can read the reviews of this lift table to see that we have received 5/5 stars from every person who has left a review. At $699 you get a whole lot of lift for a lower price. This rugged lift has a net weight of 395 lbs. without front extension (with the front extension, it weighs in at 431 lbs.). The lift includes a full one year warranty. It features a 3 stage adjustable front extension, making the lift as long as 110". It also comes with a wheel vise with adjustable front stop, as well as a pullout/drop through for rear tire change. We offer financing, too, if you need it. We currently ship this lift to 48 states and Eastern Canada, too, so you don't have to be a NH resident to get in on the deal, but if you are in the New England area and you can come up to the shop to pick up, you will save on shipping costs. PRO 1200 MOTORCYCLE LIFT IN THE NEWS: We recently presented our lift at Laconia Bike Week earlier in June, working with The Hawk 104.9 to give away a free lift to a patron of Motorcycle Week. We also partnered with DAM Motorcycles during bike week, as they used our lift exclusively for all service they performed on bikes that visited their booth. We also aired a radio commercial to the Lakes Region. Also we recently announced new lift colors and as of the last 2 weeks, we are now shipping to Canada. Need Sides? Check out the side extension (and free shipping) package here: /pro-1200semax-motorcycle-atv-lift-package-free-shipping.
Comments (0) details
New Lift Table Colors -Thursday, June 20, 2013 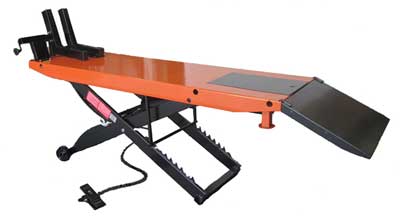 We mentioned our new lift tables in an earlier post, and I posted a video of our special offer. I had a nice photo shoot up at the shop and wanted to post some pics of the orange table/black undercarriage lift. It's really so sleek looking and thought pictures might bring that point home! 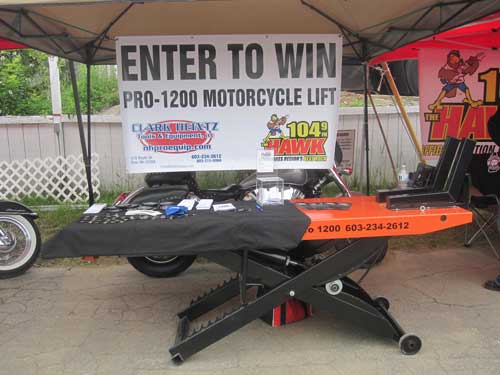 Still waiting to find out the PRO 1200 motorcycle lift winner's name! As soon as I get that, I will post it here. After we made the rounds to where our lifts were being displayed, we had very different perceptions of the two places we visited! (We actually ended up having three lifts displayed, too, since Randy's Cycle Shack bought one and kept it at their booth, too. What a great guy he is. Make sure you contact them for service if you live in the Philly area.) Another business, DAM Motorcycles reached out to us wanting to use our lift exclusively as their full service lift during bike week. They plan to take the lift to Sturgis, as well. They are absolute gentlemen! We arrived at their booth and they had our flyers out on display, along with our contact info and were very enthusiastic about the lift. They told us they had done about 20-25 bike services and the lift was excellent. We appreciated their insights, after using it a number of times. It's great to hear this feedback. They also said they'd had inquiries about the lift from the bikers needing service and they really helped to play us up. We were so appreciative of their excitement over the lift, and collaborating with them was a pleasure. We also collaborated with the local radio station who was giving away our lift. They developed a radio ad for us, and gave us on air "mentions" during bike week. They had our PRO 1200 motorcycle lift set up right there at their booth during bike week. However, we were disappointed when we visited the booth on Thursday, the lift was covered up with some cloth, and the Hawk had placed their own promotional pieces on top of it (note our website is completely covered up in the photo above). It's really a striking lift, black undercarriage and orange table; I think if it had been visible to the public, this would have really helped. Also, when we visited we noticed the attachments that were supposed to go with the lift (front extension, etc.) were not set up or displayed in any way. This looks like a very different lift when you aren't able to view everything that comes with it. We had flyers made up for folks to take when they stopped to check out the lift. There were no flyers to be found when we visited. We finally located someone after 10-15 min inside a trailer who did give us more flyers to put out. Sounds as though the flyers were blowing away, but I think a paperweight would have easily remedied that? Also, note in the photo above, there's a motorcycle behind the big sign and also a smaller sign poking out, to the right, behind the bike...that's the sign we had created specifically for this event, but isn't very visible from where people were walking (which is where this photo was taken from). However, despite that experience, meeting so many other great people made it a really nice day, overall. It was great to finally experience bike week in person (I had never been there before), and see ALL the great booths set up with anything and everything "biker themed" that you could imagine! UPDATE: Part of our deal with the Hawk is we would raffle off one of our lifts to a lucky winner. Folks filled out an entry form, which were all to be presented to us at the end of motorcycle week. On top of all these other "strikes" we listed above, the Hawk informed us that the leads were inadvertently thrown out. What a tremendous waste of promotional funds. We will not work with them again. Live and learn. 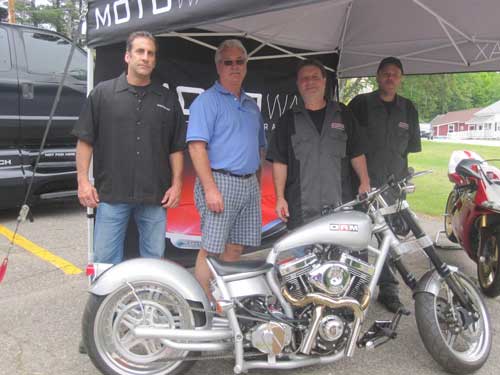 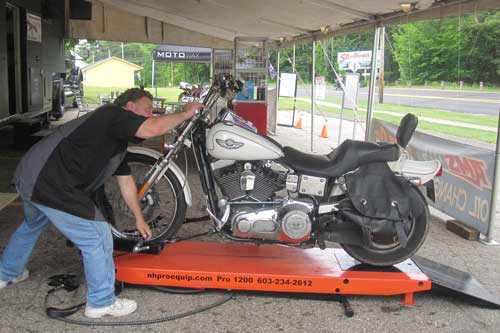 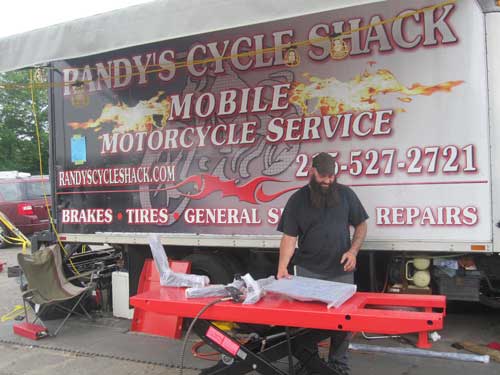 Our first visit of the day! A Big Shout Out to Randy's Cycle Shack - As we unloaded and set up our PRO 1200 motorcycle lift for The Hawk, Randy approached us wanting to buy a lift. We delivered it today (between bouts of rain!) - Here's Randy with the lift at his booth. Thanks again, Randy! Visit his website at http://www.randyscycleshack.com/ - they do general service, as well as brakes, tires and repairs. If you are in the Sellerville, PA area, be sure to check them out 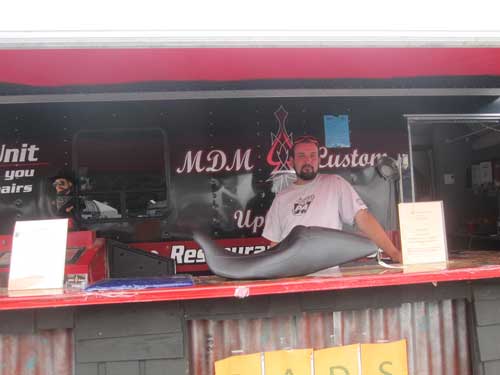 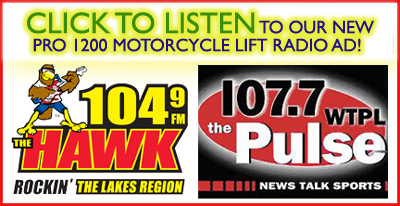