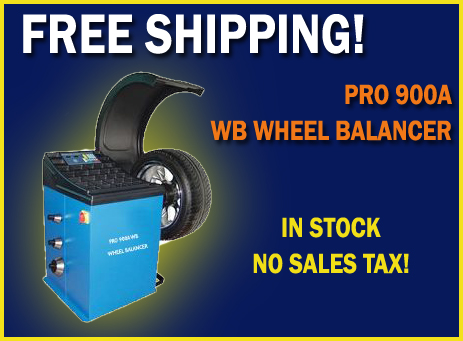 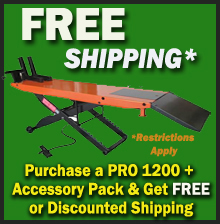 Well, the PRO 1200 motorcycle lift is now offered with bigger than ever savings deals! We continue to strive to find you the best deal possible. This lift table is only $699 so we're doing everything we can to offer free shipping to as many folks as possible.

As of Aug. 1st, 2013 we announce free shipping* with the purchase of PRO 1200 motorcycle lift + accessory package. The Free Shipping deal applies to only certain locations. If you are not within the free shipping zones, you will see a considerable shipping discount. *Please note, there are free shipping restrictions: * 1. Free Shipping to Commercial Location with means to download. * 2. Must Purchase PRO1200MAX Lift Package @ $899 * 3. Some regions we offer reduced shipping costs in place of free shipping. ALSO - Right now, the PRO 1200 orange or red table lift tables are being offered at the special low price of $699 (regularly priced at $739). The PRO 1200 motorcycle lift is 1,200 lb capacity and includes a wheel vise & wheel stop, 3 stage adjustable front extension, loading ramp, pullout/drop through for rear tire change, stabilizer bar and one year warranty.