We are excited to present our CRX Series line of toolboxes, manufactured by Extreme Tools - with upgrades added by NHProEquip! We have many storage tool cabinets, hutches, chests, and lockers to choose from!

Purchase select roll cabinets / sets, available in 55" and 72", and be eligible for a stainless steel top for only $200!

The following CRX Series tool boxes are included in the sale. Order one today and get a stainless steel top for only $200! Limited time offer. 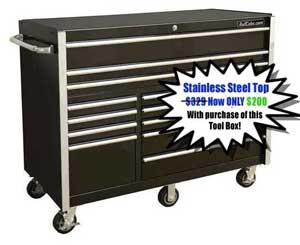 Allison Auto Repair posted a nice pic of their new Phoenix Tire Changer and Balancer to their Facebook page. They write:

A new addition to our facility! We now have the ability to mount and balance tires up to 26" inches! We also have a state of the art tire pressure monitor scan tool to alleviate that pesky tire pressure light on your dash! Call us for all of your wheel and tire needs! (631)737-6267."

When I inquired about the machines and if they are working out, they replied:

"The tire machine and wheel balancer are awesome! Thanks for all your help!" 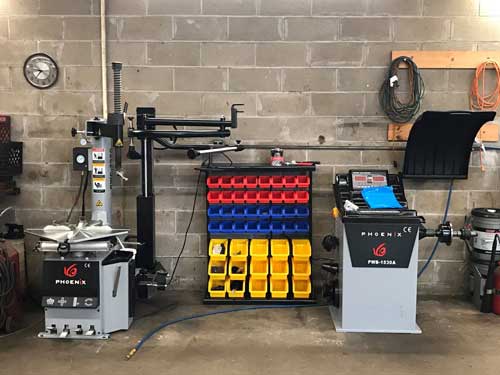 Scott shared these nice pics of his CRX723019RC Rolling Tool Cabinet - his tools are arranged so neatly! He tells us, "Love it. So glad I pulled the trigger on the 72”. Thanks again." He then added, " Being able to organize so I can find everything was huge."

The IGBT is a fairly recent invention. The first-generation devices of the 1980s and early 1990s were relatively slow in switching, and prone to failure through such modes as latchup and secondary breakdown. Second-generation devices were much improved, and the current third-generation ones are even better, with speed rivaling MOSFETs, and excellent ruggedness and tolerance of overloads. The extremely high pulse ratings of second- and third-generation devices also make them useful for generating large power pulses in areas like particle and plasma physics, where they are starting to supersede older devices like thyratrons and triggered spark gaps. Their high pulse ratings, and low prices on the surplus market, also make them attractive to the high-voltage hobbyist for controlling large amounts of power to drive devices such as solid-state Tesla coils and coilguns. Availability of affordable, reliable IGBTs is a key enabler for electric vehicles and hybrid cars. Toyota's second generation hybrid Prius has a 50 kW IGBT inverter controlling two AC motor/ generators connected to the DC battery pack.

Plasma cutting, simply stated, is the process for cutting steel and metal of different sizes and thickness using a plasma torch. During plasma cutting, the inert gas or compress air used in some machines is ejected at high speed from the nozzle, while simultaneously, an electrical arc is made from the gas of nozzle to the surface to facilitate the cutting. This plasma is adequately hot to melt the metal that is cut and it also moves fast to blow the metal far from the present cut. Additionally plasma arc cutters and several other applications also deploy the Insulated Gate Bipolar Transistor (IGBT) plasma cutting technology to provide more commercial plasma cutting equipment.

How IGBT Plasma Cutters Work The IGBT plasma cutters adopt a different method to start the pilot arc and are better suited for professional environments. Many IGBT plasma metal cutters will often deploy high frequency starting technology, high voltage circuit just for the starting process while others use Pilot Arc starting technology, where the torch enables a constant arc without touching the work piece. The Insulated Gate Bipolar Transistor (IGBT) versus the Metal Oxide Semi-conductor Field Effect Transistor (MOSFET) has been a controversial subject ever since the IGBT technology came into being in the 1980's. While developing light weight inverter based welders that consume less power, there are many technologies. Transistors are foundational to creating the welding arc by serving as tiny micro switches that deliver the power to the work electrode. Enormous technical information is available on the use and selection of these transistors and the suitability of each to different application.

It is a fact that MOSFETs are not ideally suited to handle the extreme heat and voltage pressure mounted on them by the industrial welding environment. While MOSFET is certainly sufficient when powering lower end welding equipment, they are not able to measure up when meeting the demands of heavy duty welding requirements. Of course, MOSFET technology is still available in a limited way in the welder manufacturer's list of products. This is to offer customers an economical alternative particularly for hobbyists and other enthusiasts. Most manufacturers cater to the needs of the professional welder and the welding industry in general by offering an all new line of IGBT based welding inverters. It has to be admitted that for certain low-end welding applications, MOSFET technology has failed unable to cope up when pushed to limits. IGBT technology, on the other hand, has proved extremely capable of handling all types of work, however tough. The transistors that were commonly used earlier were MOSFET but today things have changed and IGBT plasma cutters are the ones favored in commercial and industrial applications where the demand of the size of the amperage is high. The IGBT plasma cutter can be commonly found in several high current plasma metal cutting machines that put out more than 60amps of power. There are several IGBT plasma cutters and welders lined up in the market and most of them are of high quality, easily portable, competitively priced and widely bought by professional welding operators. VISIT OUR PLASMA CUTTERS AND WELDERS HERE.

**Info for this article courtesy of Everlast Power Equipment Inc. and Wikipedia

Next, lower the lift completely and secure the ramp to the lift. 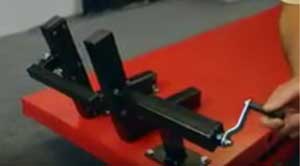 Prep the bike for the lift

Attach soft straps to the handlebars of the bike.

Prep your ratchet straps to the right length and have them
within reach of the front vise.

With the bike ready and the lift ready, slowly load the bike onto the ramp.

The extra long pro 2500 ramps make loading a bike by yourself simple.

While holding the front handlebars of the bike,
secure the wheel vise tightly. 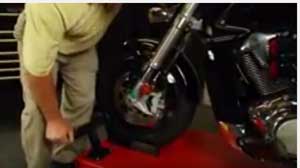 Next, attach one of your straps to the lift
and then to the soft straps on the bike. Tighten the strap until there is tension. 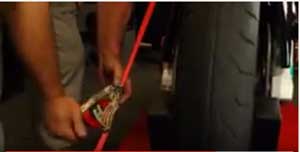 Then repeat on the other side, making sure the straps are even, and the bike remains level.
Tighten the straps enough to slightly compress the front forks of the bike.

Your bike is now secure on the lift.

Follow the manufacturer's instructions for raising and lowering your lift.