Suzuki Samarai Rock Crawler gets a lift on the Elevator 1800U Table Lift -Monday, January 28, 2019

WOW! BIG Thanks to Bryan in Greenville, SC for sharing this pic of his 4x4 Suzuki Samurai Rock Crawler on his Elevator 1800U Table Lift! Bryan has generously shared so many photos with us - as well as a lot of feedback about his lift! We really appreciate him and his enthusiasm! Make sure you check out his Facebook page - his business is Twisted Fab Motorsports. He's a great guy and he'll take good care of you. He works on all kinds of vehicles from ATVs to lawn tractors and is expert in metal fabrication.

He commented that "It's the best tool in my shop. It's saved my back from getting up and down off the floor. It has side panels to make it wide enough to lift any side by side." 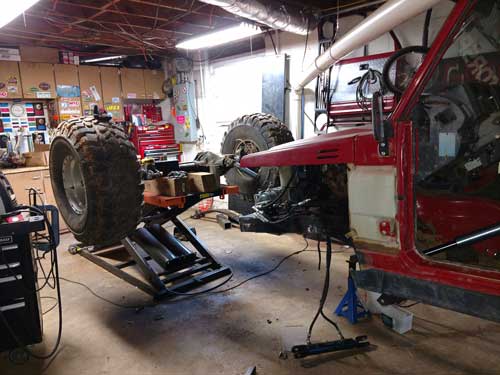 Ray in Kosciusko, Mississippi, left us a really nice review about his Elevator 2000E Lift on our website, which we were so happy to see. Thanks to Ray for taking the time to leave this detailed review!

"I own a farm in the sticks of Mississippi and decided I was too old to be working on the floor with all my machines.  I needed a lift to handle my Kubota RTV which weighs 2000 lbs plus a variety of other machines including motorcycles, ATVs, lawn mowers, etc.  I talked with Clark about he 2000E and it seemed perfect for my needs.  I did ask Clark if he hired his kids and cousins to write the reviews on the product.  No one gets all 5 stars on anything.  Here is another one.  The lift is made like a battleship.   It is smooth and handles my needs perfectly.  I ordered the wheel chock instead of the vise since I work alone most of the time.  I am not sure I would do that again.  I am not coordinated enough to lock the chock sitting on the bike.  I think the vise might be a better option but the chock works fine for my motorcycles.  If you have something with very wide front tires the chock may not work so good. If you need a heavy lift with wide ramps, this is a great choice."

Below is a pic he shared of his Honda Goldwing up on the lift: 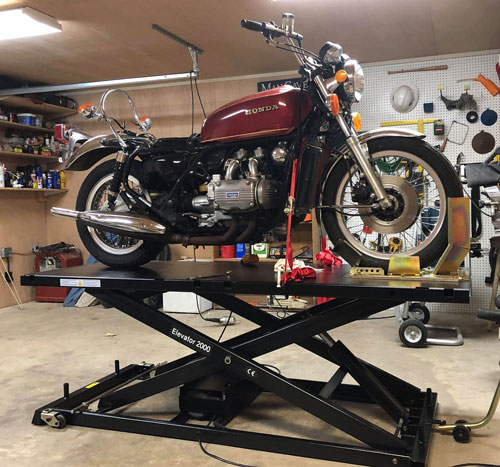 We have nice Phoenix Tire Equipment in stock right now. Our biggest selling Tire Equipment set is our PWB1535A Wheel Balancer and PWC2950A Tire Changer set. The tire changer includes a helper arm and a duckhead made of durable plastic that can be used when working with fragile or high end wheels. It also features a no flex - and heavy duty! - 28" turntable, 110 volt electric power for forward and reverse, and air power for clamping. Includes self-centering clamp with stepping function, a quick Inflation device for tubeless tire (bead blaster), and precise inflating/deflating air gauge and hose. This machine is comprised completely of rugged metal air valving throughout machine. 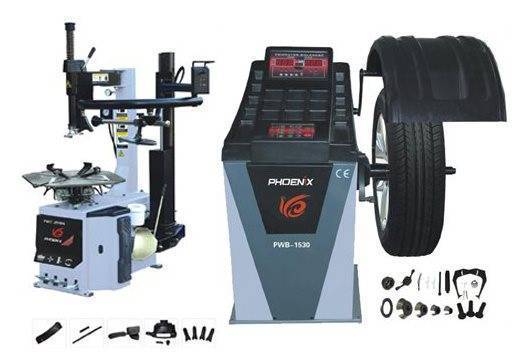 When I first jumped on board with this SEO job, it was exciting for me to see Clark's level of commitment, his integrity. Quite Frankly, it's infectious! He related a story to me about a customer that came up from MA, I think it was, wanting to buy a toolbox Clark had posted online. At that point, Clark had already promised this toolbox to another customer, but the gentleman who had traveled up to the shop desperately wanted it.

He offered Clark more money, but Clark said he couldn't do that because he'd already promised it to someone else. Oddly enough, after the gentleman was "turned away," another toolbox, the exact same model, came in. Clark was able to call him and tell him he had another one. The gentleman wanted to pay him above and beyond the cost, because he was so happy to have it! Clark related the story to me as a "what great customers I have" story, but I kept thinking about what a reflection it was on Clark...

I think it's these qualities that have sustained him for the last 42 years. He survives, even through economic downturns, because he is honest. So people keep coming back. Anyway, Clark repeatedly declined the extra money from this happy customer. The gentleman insisted on paying more and wouldn't take no for answer, so Clark ran to the back of the warehouse, pulled out some sweatshirts or hats or something with another company logo that Clark is connected with--to offer to the gentleman, as a courtesy. Both walked away happy with the transaction.

I think it's important to relate these stories to our customer base (and to those who are potentially our customers!) because that's the kind of guy he is. If you are looking to purchase a product from an unknown entity, stories like this really draw you to the salesman. We now sell to 48 states, and ship daily across the country. We want people to understand that integrity is a huge part of the sales process. Clark sells products that he stands behind, and the fact that he stand behind them speaks to his character. You get honest service with him, and nothing less.

Scott D., of SD Motorworks, in Greenville, Texas, left this nice review on our website about his 2000E Electric Motorcycle-ATV-UTV Lift Table. We appreciated this review, as it outlines both quality of product and customer service. We are glad we served you well, Scott. Thank you for taking the time to leave your comments.

"I own a small ATV shop here in East Texas and I’m getting older and was really tired of getting up and down all the time so I searched and reviewed lifts for about 3 months before I made my final decision and customer service played a roll in that decision.  Clark was awesome answering all my questions about the differences in the lifts and after several phone calls and bouncing ideas back and forth, I purchased the 2000E and it was the best decision I could have made.
First, the packaging was 2nd to none – everything was labeled and even had pictures with a list of everything that it came with.
The 2000E lift is amazing!  I love the fact that is electric over hydraulic and raises up 4’ in the air!  It’s very smooth, fast and built extremely well.  I have been using the lift for about 6 weeks now and have zero complaints. I have had Motorcycles, ATV's, and UTV's all on the lift and no issues to report." 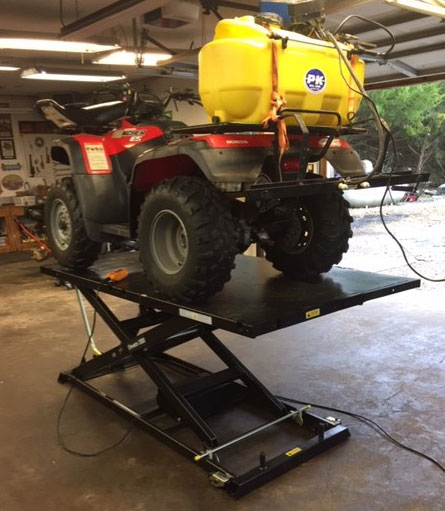 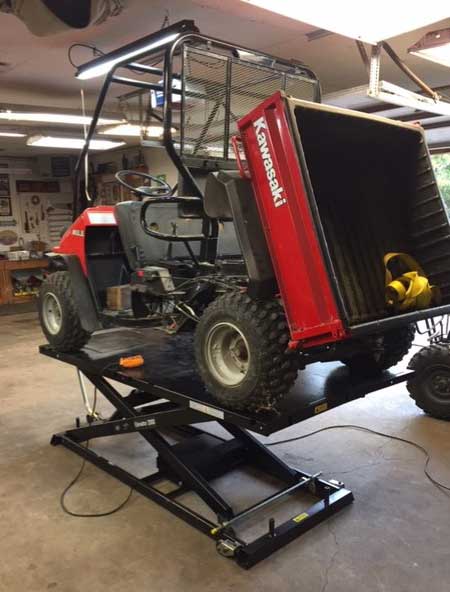 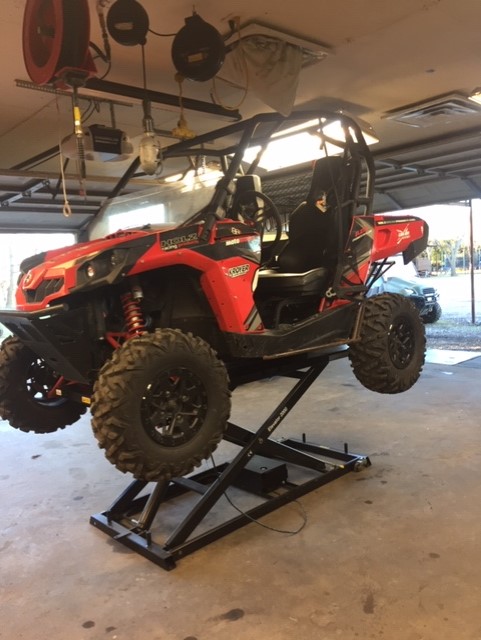 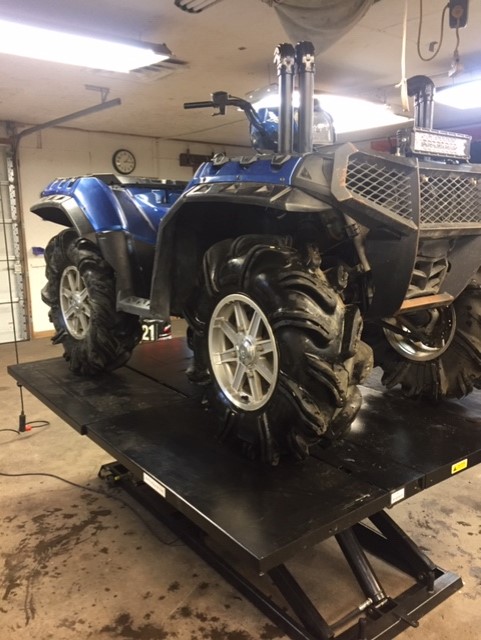 "I bought the motorcycle lift as a gift for my father for Christmas. I assembled it and gave it to him Christmas morning. He loved it, but after having it go up and down twice the foot petal broke. We contacted the company I bought it from and a new pedal was sent out right away. Besides the pedal breaking, the lift is great and one of our bikes is on it as we speak. We would definitely buy another with out a doubt. The company was great to deal with! We were very happy how quickly things where taken care of and the pedal that we got was better then the first. From using it the last few weeks, I would rate it a 5 star and and if we can make more room in our garage we'll be getting another one! Thank you Earl B."

NOTE: We now include a new, upgraded pedal in our lift table packages to avoid such situations. We're glad for this feedback, as it helps us better understand any potential issues that may arise. We're happy to hear this issue was resolved to your satisfaction, Earl. Thanks for the helpful comments. 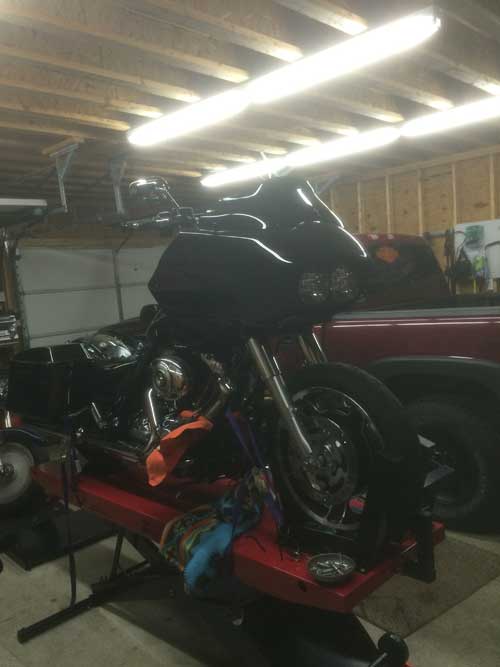